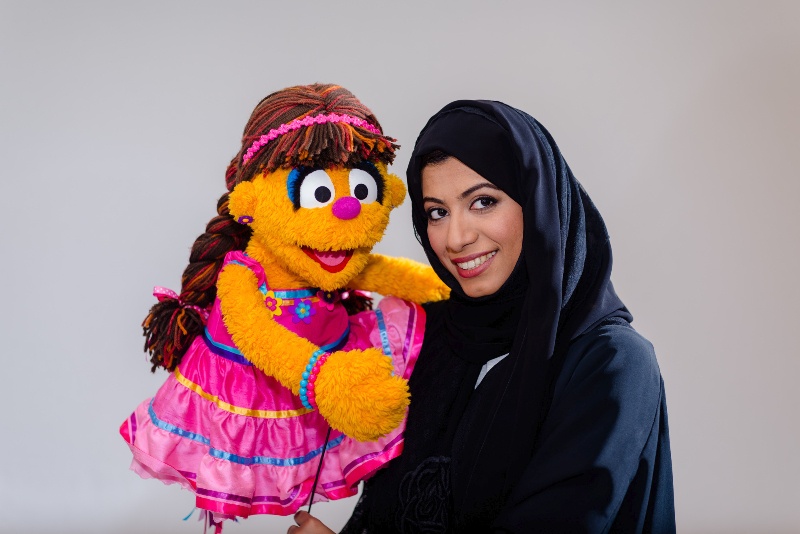 Iftah Ya Simsim, the Arab world’s pioneering television series based on the world famous Sesame Street, invites children and families to meet the newest addition to the Iftah Ya Simsim Muppet family, Shams – an energetic six-year-old girl muppet.

Making her first public appearance at the annual Abu Dhabi International Book Fair (May 7 – 13) ahead of the much anticipated re-launch of the show later this year, Shams will take to the stage with her friend, puppeteer Michel Jabali, to help narrate Iftah Ya Simsim stories such as ‘Faseel the Camel’ and ‘Kiki and Koko in the clinic’. The show’s favorites, life-sized characters Elmo and Gargour will also be present at the fair to meet and greet guests and take them on a final walk around.

The show is well underway with filming and production at its Abu Dhabi home, and I speak on behalf of everyone at Bidaya Media when I say that the public debut of Shams is an incredible milestone in our journey to bring one of the region’s most loved television shows back into homes of old and new fans alike. We felt that the Abu Dhabi International Book Fair is the perfect platform to introduce Shams, as it is both educational and a great way to reach out to young fans.

Shams is brought to life by Asma Alshamsi, a professional puppeteer and UAE national. Joining her on stage is Michel Jabali, who is also a puppeteer on Iftah Ya Simsim.

First aired in the 1980’s, the new Iftah Ya Simsim will return to screens later this year. Regarded as a pioneer in the field of Arabic children’s entertainment, Iftah Ya Simsim was the first locally created and produced Arabic speaking version of the world’s longest-running educational TV series for kids, Sesame Street. Set to return with a cast of characters both new and old, the characters are brought to life by talented regional actors and puppeteers in support of the highly localized, enriching Arabic content of the show.
Shams, who is the first of the new Iftah Ya Simsim Muppets to make her public debut, will appear on stage throughout the duration of Abu Dhabi International Book Fair. \

Children are invited to Knowledge Square in Hall 7, Creativity Corner A40 to meet and listen to stories read by Iftah Ya Simsim puppeteer, Michel Jabali and the show’s muppet, Shams at the following timings: