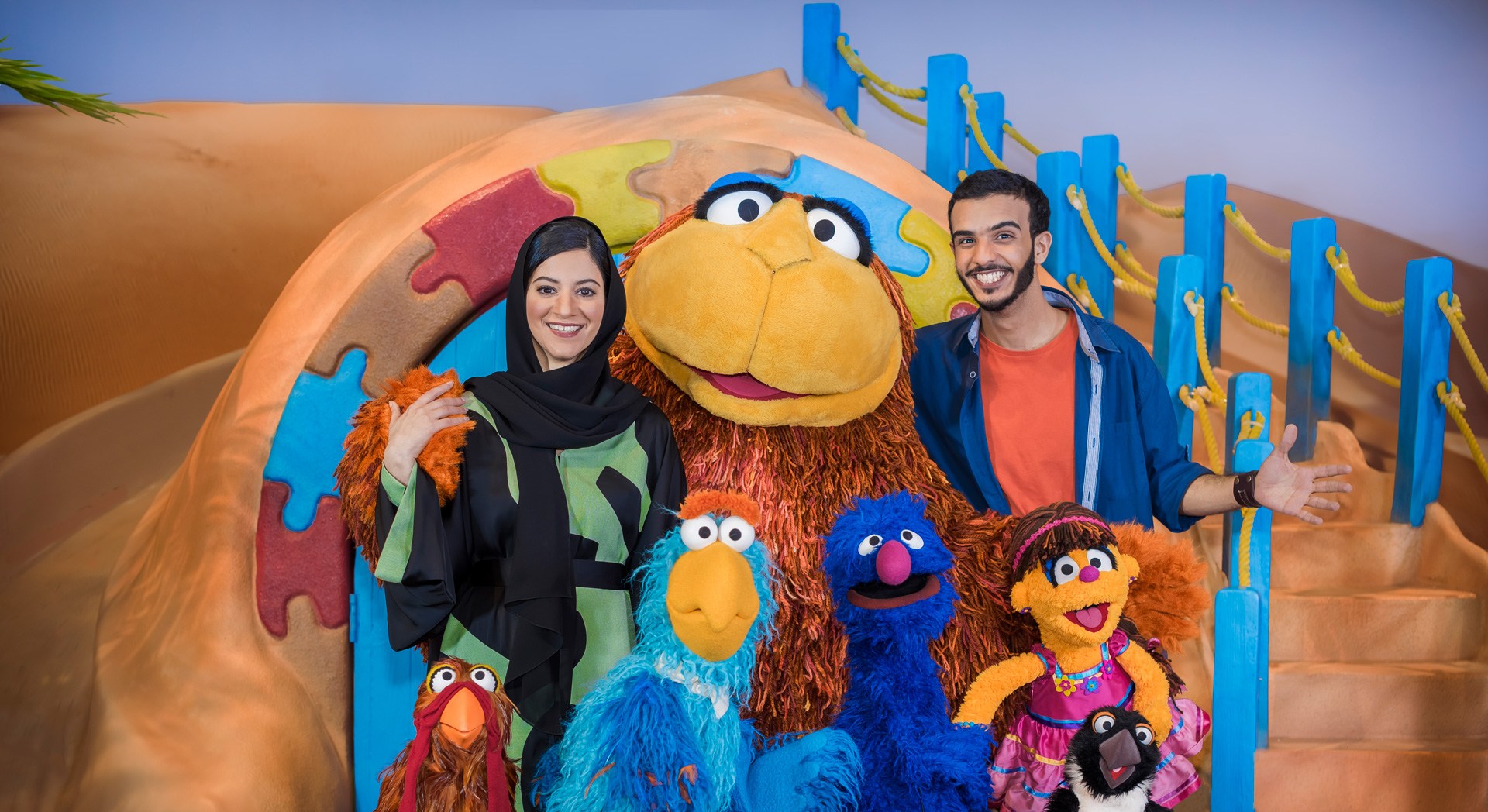 Abu Dhabi, 2 February 2015: Iftah Ya Simsim, the Arab world’s pioneering television series that targets the educational needs of children aged 4 to 6, is announcing its impressive list of Muppet characters and their talented Arab puppeteers from UAE, KSA and beyond, as they have arrived at twofour54 intaj studios in Abu Dhabi to kick-start the in-studio production.
The revival of the eagerly anticipated show that once captivated the hearts and minds of Arab children in the 80s is now back to open its doors to some new and exciting characters to join the list of lovable puppets.
The all new season of the show is bringing back the popular local characters of 6 year old big, gentle and loveable No’man, and Melsoon, a colorful ageless bird Muppet, known for his voracious quest for knowledge. The newest additions to the Iftah Ya Simsim family will include Shams, a quick witted 6 year old girl who is full of energy and loves to express herself, as well as cute Gargur, a special resident on Iftah Ya Simsim who provides his trademark zaniness, comic chaos and a unique perspective on the world.
Abdullah Kassem from KSA, and UAE national Asma Alshamsi, will give life to Iftah Ya Simsim’s two lead characters – No’man and Shams. Passionate about acting, and equipped with over fifteen years of experience in children’s theatre, Abdullah draws his inspiration from his four children for the role. Asma’s work with children with special needs, and as a professional puppeteer, has helped bolster her performance for the show.
Natheer Khawaldeh from Jordan plays the loveable and humorous Gargur. Maher Mozawak, a Syrian actor, brings rhyme, music and wisdom to the charming character of Melsoon. Noura Sadaka and Michel Jabali make up the rest of the impressive talent list for the other Muppets on the new Iftah Ya Simsim show.
“This has been a venture that I have been looking forward to ever since I was taken on board Iftah Ya Simsim. I am so enthusiastic to finally start working on such a show that is a far more enriching and amazing experience than I had ever imagined’, says Abdullah Kassem, the puppeteer behind No’man.
Joining the pool of cast will be human characters, Rashid and Amal, the ambitious sibling duo in Iftah Ya Simsim who came back to the neighborhood where they grew up and had fond memories of as children. Saudi talent Abdulla Rafaah will play the role of Rashid, while the Emirati artist Fatma Al Taei, will be behind the role of a Gulf female, Amal. Each character has its unique personality, linguistic style and behavior that are consistent to their age, environmental context and cultural background.
The show is being produced by Bidaya Media, a children’s education content development company based in Abu Dhabi. “This is an exciting time as we finally see all our hard work and preparation being executed with the start of the in-studio production, for Iftah Ya Simsim!
Our talent represents the potential within the region and the puppeteers are excited to begin work on this venture”, says Cairo Arafat, Managing Director of Bidaya Media.
Iftah Ya Simsim is a pioneer in its field being the first locally created and produced Arabic speaking version of world’s longest-running education TV series for kids, Sesame Street. The life behind the characters are talents who have been selected from the region making this a truly organic, home-grown initiative which supports and promotes its regional talents. All of Iftah Ya Simsim’s content is based on the educational curriculum and objectives that are regularly reviewed and updated by the Educational Advisory Committee and the representatives of the Arab Bureau of Education for the Gulf States (ABEGS).
The show, which is well on its way to reaching the homes of children in the region, is set to launch later this year. The heart and soul that has gone into creating this show is set to materialize and bring educative, informative and enriching fun into the lives of those deemed to be the future vanguard of the region.