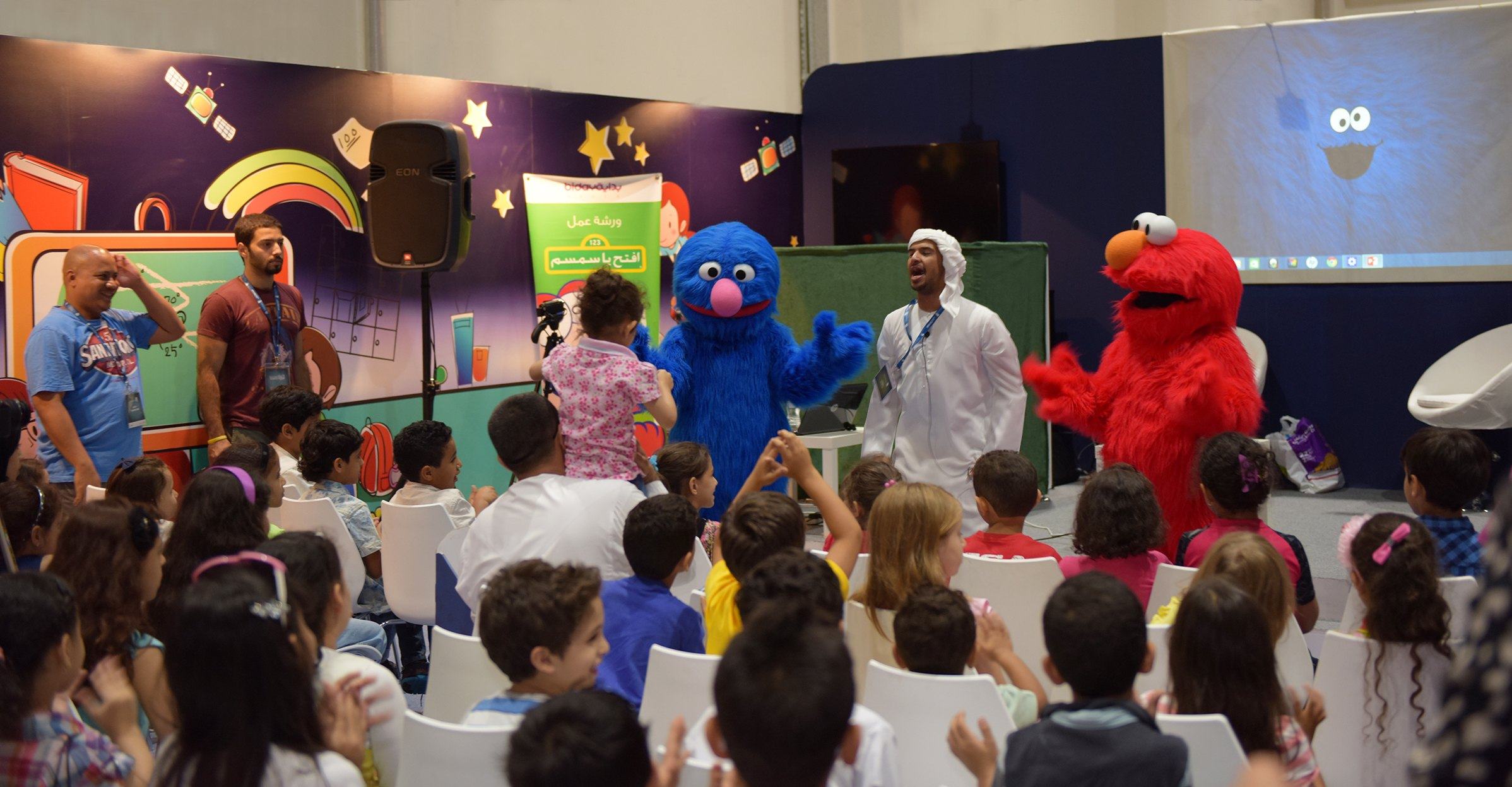 Abu Dhabi, May 11 2015: The newest addition to the Iftah Ya Simsim family – Shams, an energetic 6-year-old girl, had hundreds of children captivated at her very first public appearance during a series of special book reading throughout the Abu Dhabi International Book Fair, taking place from May 7th to 13th, 2015.
Joining Shams was Iftah Ya Simsim puppeteer Michel Jabali, who helped narrate Iftah Ya Simsim stories such as ‘Faseel the Camel’ and ‘Kiki and Koko in the clinic’ to an audience full of enraptured children. Asma Al Shamsi, an Emirati puppeteer who is the life behind Shams, ensured that new character remained true to her enthusiastic self and kept the atmosphere upbeat throughout, while the show’s favorites, life-sized characters Elmo and Gargour were also present at the fair to meet and greet children and guests.
Commenting on the event, Cairo Arafat, Managing Director of Bidaya Media exclaimed, ‘We were certain that the Abu Dhabi International Book Fair would be the perfect time and place to introduce the newest member of our Iftah Ya Simsim family. We are so pleased to have witnessed such a warm welcome for Shams from the audience. We are positive that she had an educationally, socially and emotionally enriching influence on the lives of our young audience’.
Iftah Ya Simsim is the Arab world’s pioneering television series, being the first locally created and produced Arabic speaking version of world’s longest-running education TV series for kids, Sesame Street. Set to re-launch later this year, the Television series looks forward to reaching out to children to help inspire their day to day learning and empower them as future citizens of the region.
Shams and Michel have been present throughout the Abu Dhabi International Book Fair, to read popular stories and entertain children. For those of who haven’t had the chance to witness this yet, catch the adorably entertaining duo at Knowledge Square in Hall 7, Creativity Corner A40 on the following dates:
Tuesday, 12th of May: 11.00 – 11.30 AM and 6.30 – 7.30 PM